The „Cape Race“ is a seaworthy expedition ship, which was built in 1963; the very first steel trawler built in Canada, marking the heyday of Atlantic fishing. She was deployed in the fishing grounds of the North Atlantic; Newfoundland’s Grand Banks, the Labrador Sea and the maritime areas of her home ports first in Louisbourg and later in Lunenburg, Nova Scotia. Originally designed for year-round fishing in the world’s most inhospitable sea areas, she is constructed to travel comfortably and safely from pole to pole; the hull is reinforced for ice travel, making her ideal for expeditions in Arctic waters.

The ship was built at the George T. Davie & Sons shipyard in Quebec for what was then Canada’s largest fishing company, National Sea Products Ltd.
Most components, whether the hull, engine or equipment, were certified according to Lloyd’s. At the time of her construction, the MV „Cape Race“ and her sister ships MV „Cape Mira“ and MV „Cape Aspy“ were the pride of the Canadian fishing fleet.

The vessel was designed for operation on the North Atlantic and was thoroughly surveyed twice a year by the Canadian Coast Guard.

The first captain of the „Cape Race“ was Newfoundlander Orlando Vallis who, on the maiden voyage from the shipyard in Quebec to her first deployment location in Nova Scotia, brought not only the ship safely home through thick fog, but also his young fiancée who was on board.

Captain Vallis’s son remembers: „These ships were pushed to the limits, even by my father. They fished all year round, at the pace of two weeks at sea, two days ashore. There was only a break of about a week at Christmas, and in the summer the ship went to the shipyard for a few weeks for repairs. Life in a town like Louisbourg was dominated by fish factories and trawlers, and their comings and goings fired the imaginations of young lads like myself. The captains were role models for us in many ways, and we were just as excited by news of their successes and mishaps as other young boys were by baseball or similar.“

1977 the „Cape Race“ was converted for shellfish fishing. She was overhauled in 1994 – fitted with a new diesel engine, and in 2006 she passed into the ownership of Milos Simovic who converted her into an expedition ship in the following years. Afterwards, she undertook numerous polar expeditions with guests, but also with scientists under commission by NASA and the US scientific and research institution, National Science Foundation. Additionally, she also served in various film and TV projects.

In the autumn of 2017 mareverlag acquired the „Cape Race“. For publisher and marine biologist Nikolaus Gelpke, the preservation and sustainability of the ship were of utmost priority. In order to meet his high standards of marine conservation, in 2018/19 the „Cape Race“ was given a general overhaul at the traditional Stálsmiðjan-Framtak shipyard in Iceland where she was fitted for additional fire safety and given completely new electrical and ventilation systems, electronics and equipment. Guest areas include a saloon with outside views, tuned piano and a Danish woodstove, dining room with open galley, a sauna, spacious aft deck with table and benches and a main deck – both newly built with traditional wood -, a viewing deck in the bow area, a library for passengers, an open bridge policy and expedition equipment for shore excursions to the Arctic (boats, life jackets, immersion suits, polar bear protection, binoculars, telescopes, etc.). Diving and kayaking opportunities can be arranged.

Orlando Vallis, left, the first captain of the „Cape Race”

Resume of the „Cape Race” 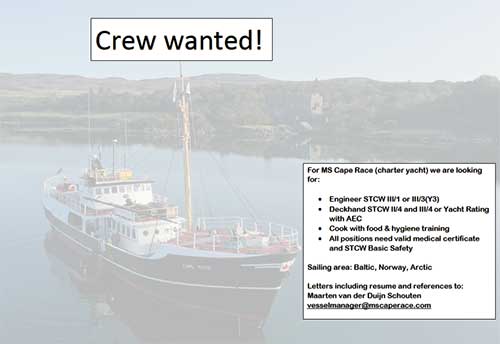 If you’re interested to work on „Cape Race“, we’re happy to come in contact with you. Please, send us your cover letter detailing why you’re interested in working wih us and a resume giving an overview of your relevant experience. We’re generally looking forward to come in contact with persons for all positions: Nautical crew, service staff and expedition staff.
It is important you have the right qualifications to work on board. You can find an overview of them here.

You can find out more about which cookies we are using or switch them off in settings.

This website uses cookies so that we can provide you with the best user experience possible. Cookie information is stored in your browser and performs functions such as recognising you when you return to our website and helping our team to understand which sections of the website you find most interesting and useful.

Strictly Necessary Cookie should be enabled at all times so that we can save your preferences for cookie settings.

If you disable this cookie, we will not be able to save your preferences. This means that every time you visit this website you will need to enable or disable cookies again.

This website uses Google Analytics to collect anonymous information such as the number of visitors to the site, and the most popular pages.

Please enable Strictly Necessary Cookies first so that we can save your preferences!